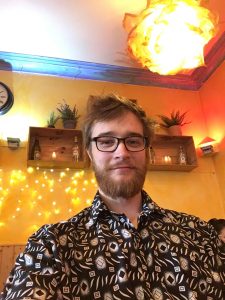 James also led the Manchester University Big Band from 2015 to 2017. He appeared as conductor for the university’s String society. Back in his native Guernsey in the Channel Islands, James founded and led All That Jazz, a ten-piece jazz ensemble and appeared as conductor of the St James Sinfonietta.

Now Peckham-based, in addition to his SLJO post James is the conductor of the Holborn Community Orchestra in London’s West End. He also works as a music teacher, composer and performer. James plays piano, trombone and tuba.

James said his goal is to “continue to establish SLJO as one of London’s premier amateur Jazz Orchestras”.